HEY - ANOTHER MESSAGE. AND GUESS WHAT?

1. technically necessary cookies, e.g. that your browser remembers whether our menu is visible
2. "evil" tracking cookies from Google Analytics (IPs anonymized, of course) partially combined with "Optimize A/B Testing", so that we can adapt our website to your needs

As long as you don't press "accept", we do not track you. Promise!

appserver.io makes heavy use of threads and their context to inherit instances, configuration values, constants, functions, class definitions and comments in a selective way. In addition to making good use of inheritance, appserver also takes advantage of threads and their context to also allow a separation of concerns where necessary. As opposed to processes, threads allow separation, yet gives developers the possibility to share data whenever needed.

What is a Context

The context can be defined as the runtime environment of a thread. This includes that EACH thread has its own context. When a thread is created, depending on the options passed to the start() method, the complete context including configuration values, as well as declared constants, functions, classes and comments of the actual environment, are copied into the new threads context.

as it will be copied into the new thread's context, when you start the thread by invoking the start() method. This is possible, through the use of the PTHREADS_INHERIT_CONSTANTS option.

Passing of constants would also be possible, if the thread's start() method would be invoked without any options or with the PTHREADS_INHERIT_ALL, which is the default value. In that case, all class definitions that have been declared before the thread has been started, will also be copied into the thread's context.

In some cases, this will be desired, but it is necessary to keep in mind, that copying everything into each threads context will also require, and, in most cases waste, a whole lot of memory. So the recommended way will be, to start each thread with PTHREADS_INHERIT_NONE and exactly define what has to be copied by passing additional options.

How to handle Errors and Exceptions

As there are possibilities for fatal errors to occur while processing a request, it is necessary to shutdown the thread in a controlled manner. Therefore, using PHP's register_shutdown_function allows a developer to catch fatal errors inside the thread's/context's run() method to implement a controlled shutdown.

The root context is, as the name already implies, the context created, when the application server is started. To start the application server, it is generally necessary to invoke the server.php script. This script defines some mandatory constants, includes the var/scripts/bootstrap.php, parses the main configuration file etc/appserver/appserver.xml, creates a new instance of the main Server class and finally invokes the start() method. The process that'll be executed by the start() method is defined in section Start-Up.

Application Deployment will be processed on container context level. This means, that all applications will inherit the container environment they are deployed in.

Usually the main server functionality will be implemented on this context level. In most cases, a server context opens a server socket, possibly supporting SSL connections, and creates the configured numbers of worker contexts which will then listen for client connections.

In addition to the contexts, which results out of the webserver functionality, the application server also requires contexts to handle requests. Complementary to a webserver, an application server must also be aware of the deployed applications and their state. This makes the system a bit more complicated, since different applications may want to load a class with the same fully qualified class name. In a standard PHP environment, this would result in a Can not redeclare class ... fatal error. To avoid this, an application server provides a separate context for each application to protect classes from namespace conflicts.

The application context will be a container's child and therefore it will inherit the root and the container context's environment, in which it was created.

The application context is not enough to handle concurrent requests. Because of race conditions, it would be necessary to execute them serialized. To allow parallel execution, each request will be processed in a separate context called request context. This is the only context that will be created just-in-time for each request the application has to handle.

The request context will be a worker's child and therefore it will inherit the root, the container, the server and the worker context's environment, in which it was created.

The following sections describes the application servers start-up process. The start-up process is complicated, because it is composed of several tasks that depends each other. For example, it is necessary to create the servers log directory, before logging can start.

The process is separated into two steps. The first step initializes the necessary instances in the required order.

In the second step, the applications are extracted from their PHAR archives. Then the configured containers, servers and applications boot. After the server sockets have been opened, in order to uphold utmost security, the ownership of the process is switched from root to the user configured in etc/appserver.xm. 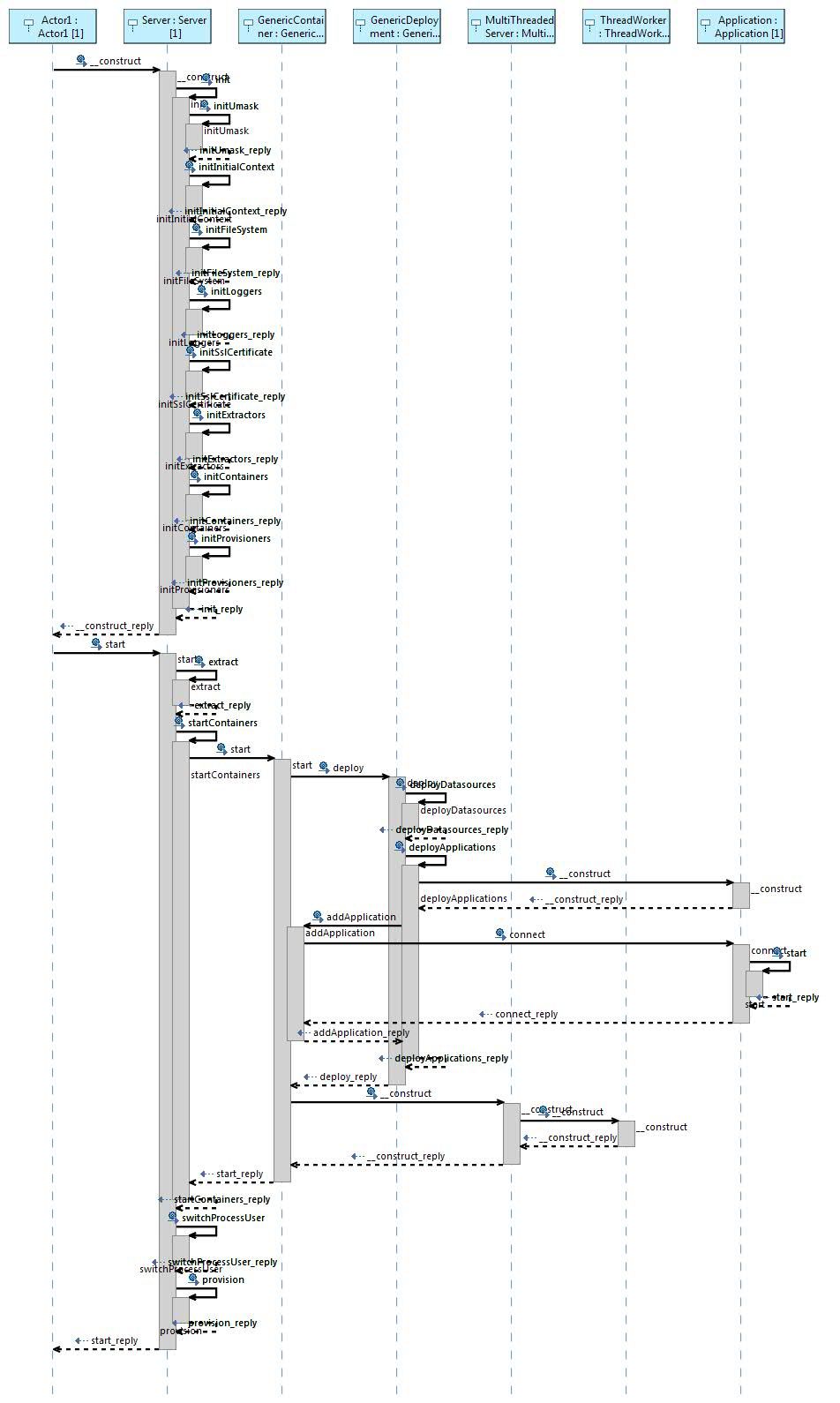 Following sections describe the workflow that will be executed during the application server's start-up. It is important to execute the steps in the order described above, because each step is a precondition for the following one.

As the system configuration is passed to the server's constructor, the first step is to convert it into a normalized and source independent object representation. After the nomalized system configuration has been set as a server's member variable, the main initialization process is started.

The next step is to set the umask for files and directories that will be created during the start-up process and later, when handling requests. The umask will be inherited from all child contexts and doesn't need to be set again.

The umask will be loaded from the system configuration initailized in the prior step Normalize the System Configuration.

As the the InitialContext is necessary for the use of any service instances, it is also a precondition for the next step, the file system initialization.

After creating the InitialContext instance, the system is ready to prepare the file system. When the application server will be installed the first time, folders like var/log are NOT created. Instead, they will be created during the application server's first start-up. Additionally, on each start-up, the application server verifies that all necessary folders are available, or if one of the folders have to be cleaned-up. This is the case for the applications temporary directory, usually located at var/tmp/<application-name>/tmp, for example.

The next step, initialize the loggers requires that the umask has been set, the InitialContext is available and the folder structure has been prepared.

The system logger initialization is necessary to log the start-up process giving the administrator or developer valuable information about the deployed applications or listening server sockets.

The loggers can be initialized as soon as the umask has been set (which influences the permissions of the log files that will be created), the system configuration is available and the filesystem has been prepared (because the folders, where the logfiles are located, have to be created during the start-up procedure).

6. Create an SSL Certificate (if necessary)

The SSL certificate creation is necessary before the server context starts, because it is necessary that at least one certificate is available, in order to bind it to the HTTPS server socket.

The extractors provide functionality to extract the application archives, like PHAR archives, which will be extracted to the container's default document root.

As the extractors needs access to the application server's configuration and services, it is necessary to make sure these instances are available before the extractors are initialized.

A container is the root context for a random number of servers for the applications. In addition, each container has a separate naming directory to store environment variables and references to the application itself, as well as the application specific class loaders and managers.

As the containers need access to the application server's configuration and services, it is necessary to make sure these instances are available before the containers are initialized.

The provisioners allow an application developer to execute custom steps after the application has been deployed, the server sockets are listening and the user has been switched. Provisioning steps are configured by an XML file, which has to be located either in the applications META-INF or WEB-INF directory.

As the containers need access to the application server's configuration and services, it is necessary to make sure these instances are available before the containers are initialized.

Before the containers and the servers can be started, it is necessary, that the application archives are extracted and their content is moved to the containers default webapps directory.

This is necesary, because the application deployment MUST be finished, before the container's servers starts, as modules like the Servlet Engine needs access to the deployed applications.

When all applications have been extracted, the containers are prepared. The next step is the initialization of the container's naming directory, followed by the datasource and application deployment and finishes with starting the servers.

After the server sockets have been started, the user can be switched from root to the user configured in the system configuration. This step is necessary to make sure that application provisioning will NOT be executed as root.

Please note that by clicking "Load Comments", your browser will establish a connection with servers from Disqus.
For more information, please visit our privacy statement.